The American Collie is an elegant, proud, attentive, expressive dog. His powerful build is well-balanced, with strong bone structure and a well-formed, not too massive looking wedge-shaped head, a parallel alignment of forehead and nose with a slight stop and ears that are carried about three-quarters erect and with about one-fourth tipping or breaking forward. The eyes are expressive and almond-shaped. The body proportions are well balanced and harmonious, the legs are muscular with correct angles and an energetic movement. Despite the abundant coat, the physique is well recognizable. The coat is very abundant at the mane and frill, which adds to the Collie’s unique appearance. The coat is comparatively simple to clean and stain-resistant. Besides the Rough Collie, the Smooth Collie exists which has a short coat. According to the American Breed Standard the Bitches are from 22 to 24 inches (56-61 cm), weighing from 50 to 65 pounds (23-29 kg) and dogs are from 24 to 26 inches (61-66cm), weighing from 60 to 75 pounds (27-34 kg). The Original American Breed Standard can be found here:   Breed Standard 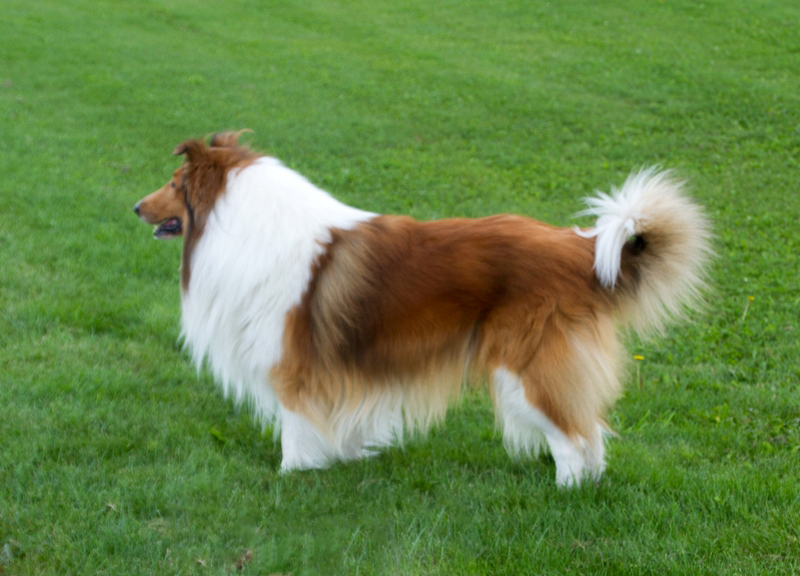 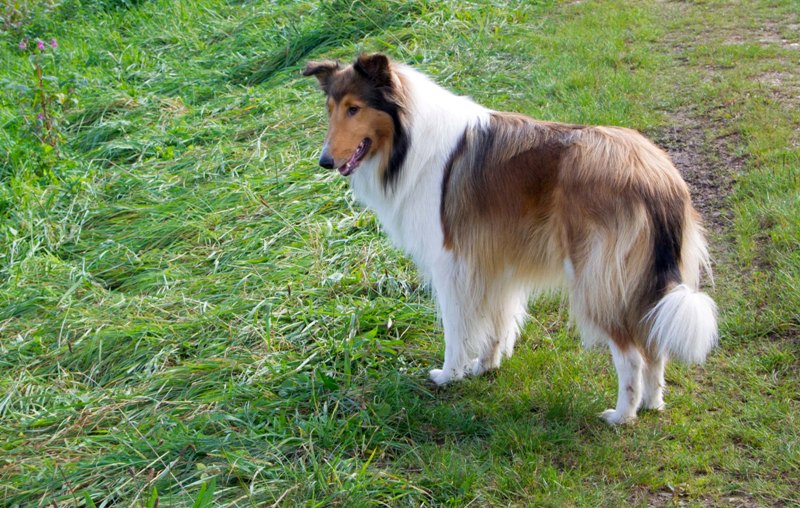 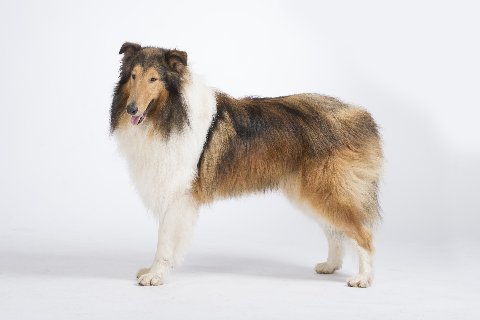 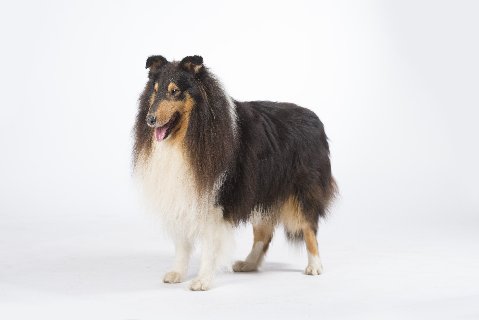 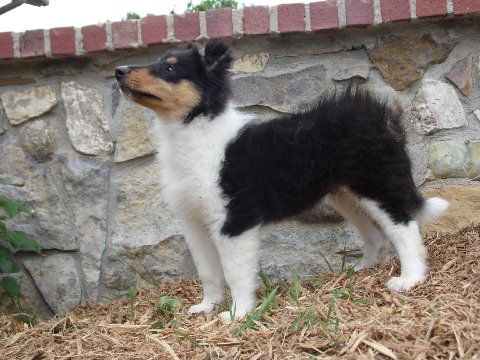 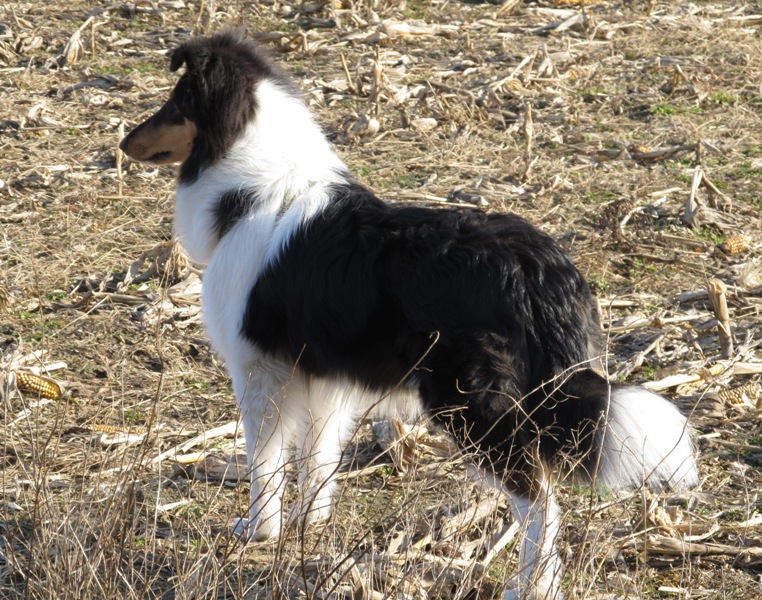 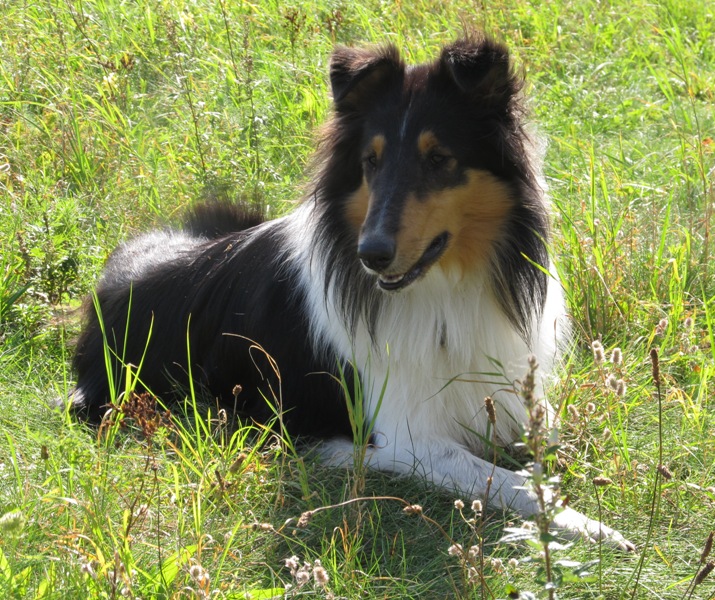 Black coatwith red-brown tan markings on the legs and face and white markings on chest, neck, throat, belly, legs and tip of tail. 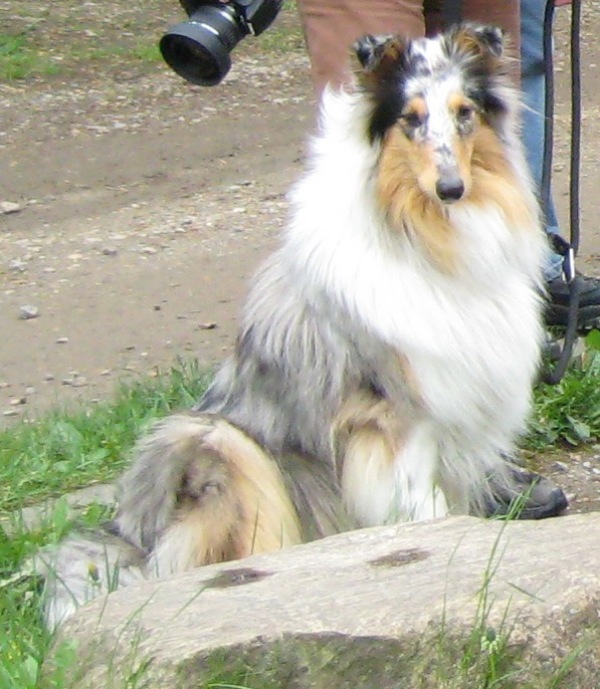 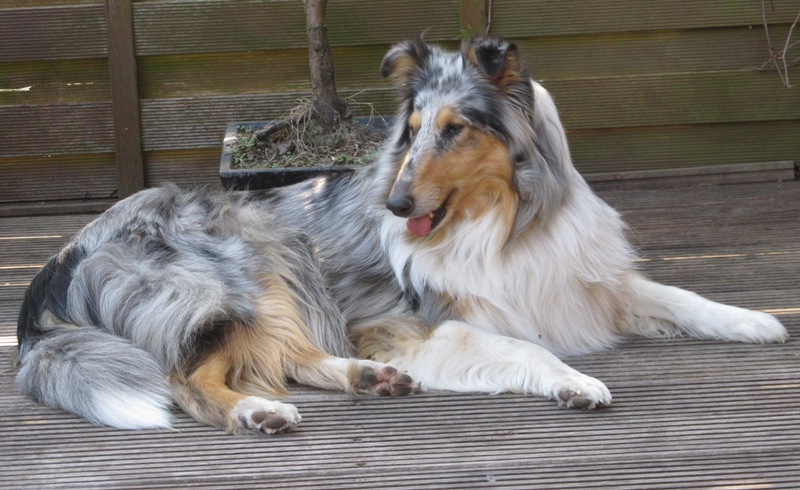 Blue-silver coat with black spots and/or patches, usually with red-brown tan markings on the face andon the legs and white markings on chest, neck, throat, belly, legs and tip of tail 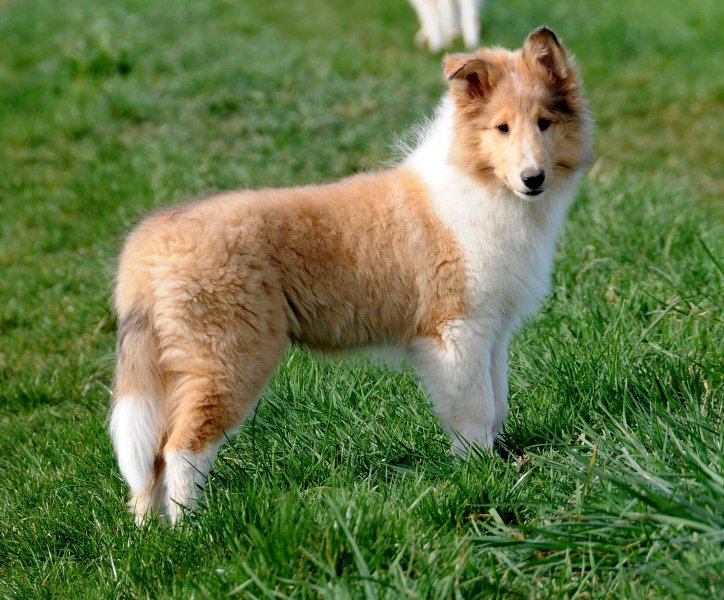 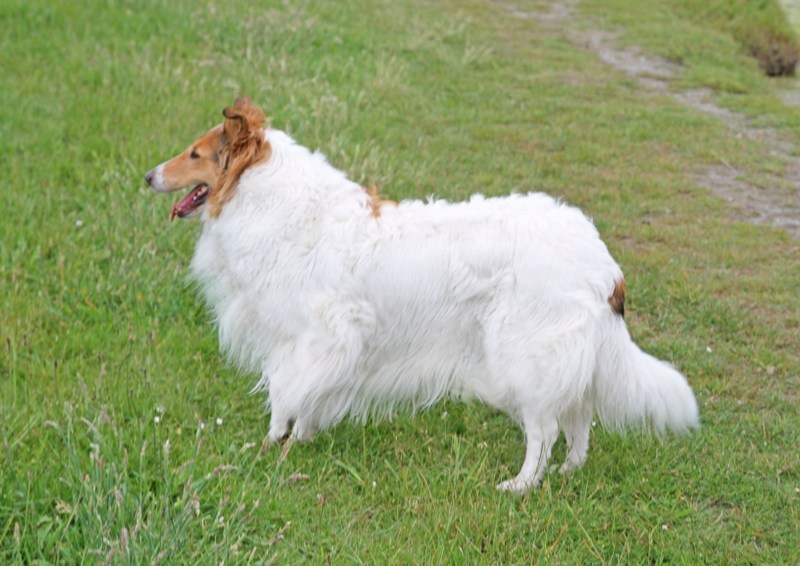 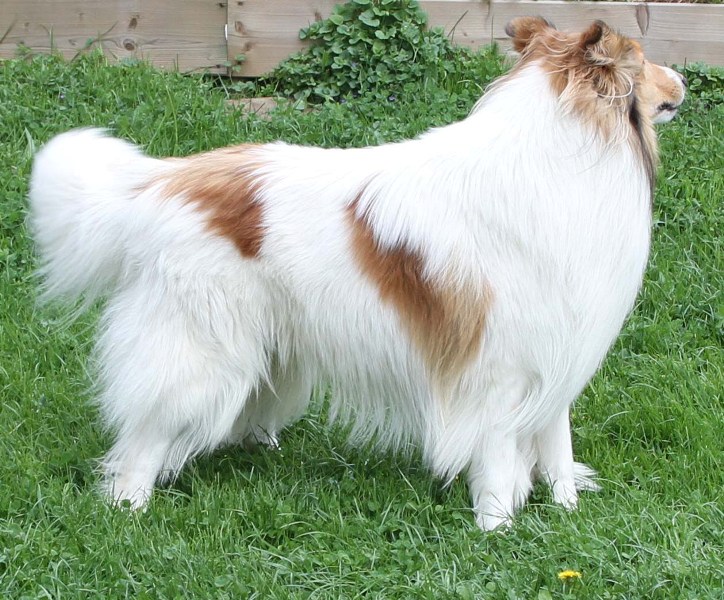 White coat, a Sable-colored head and Sable spots on the body.The same color gradations apply as for theSable (described above). 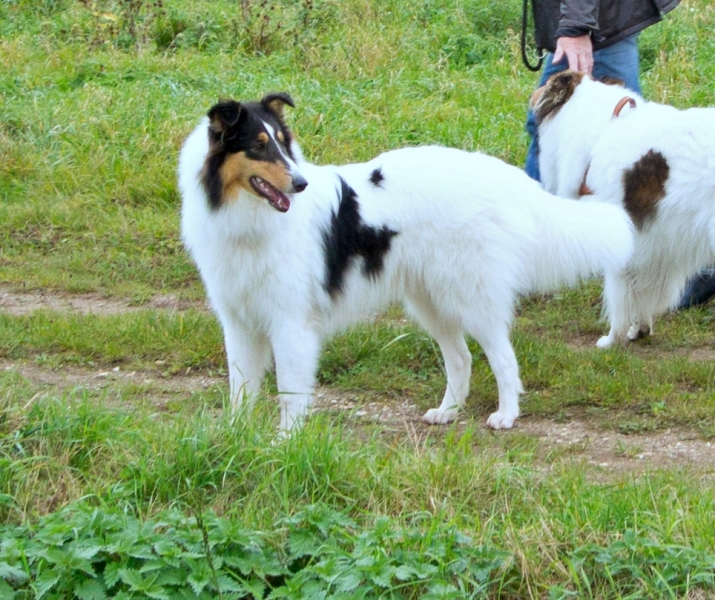 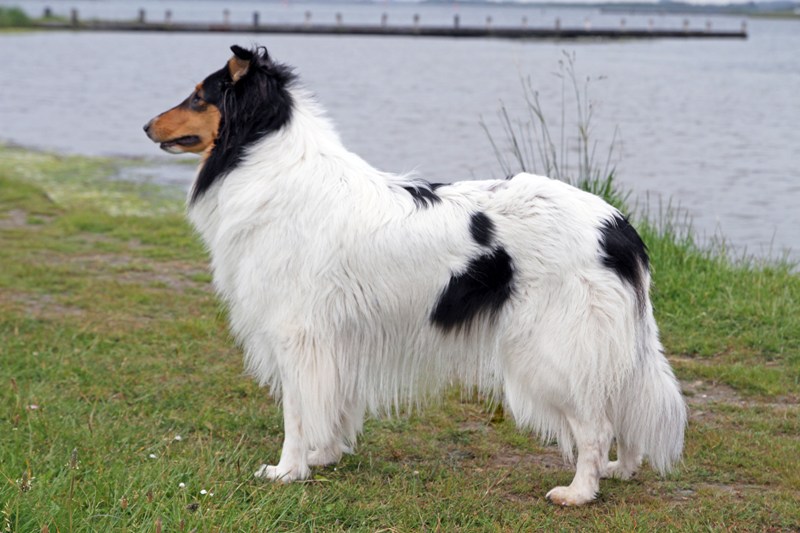 White Coat, a black head with red-brown tan markings on the face and sometimes on the legs. Black spots on the body. 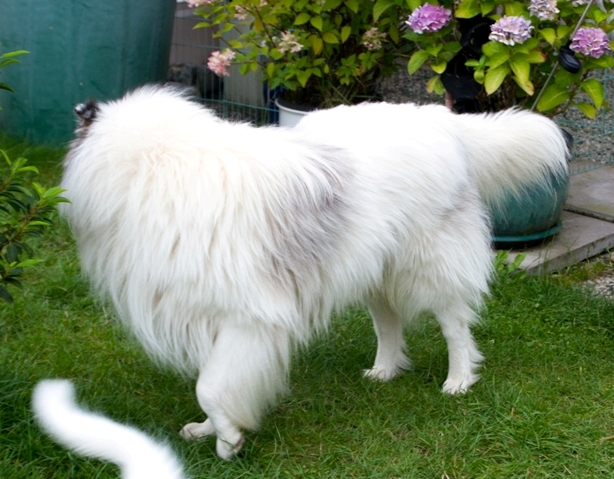 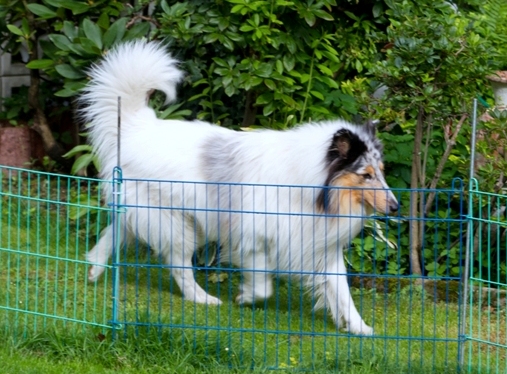 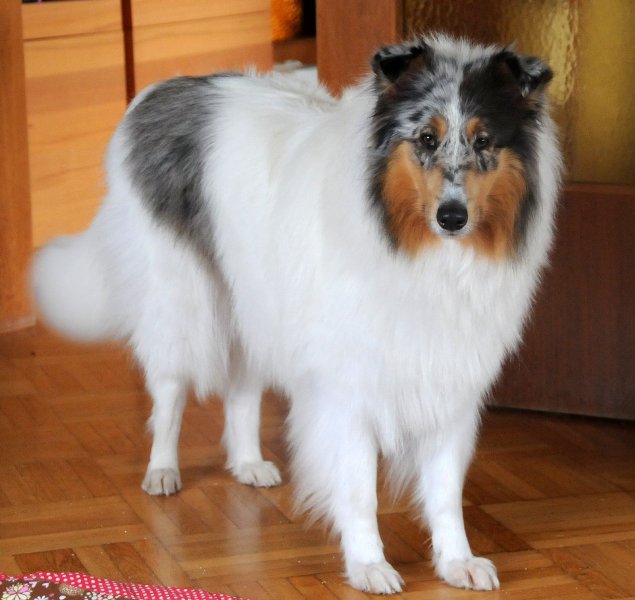 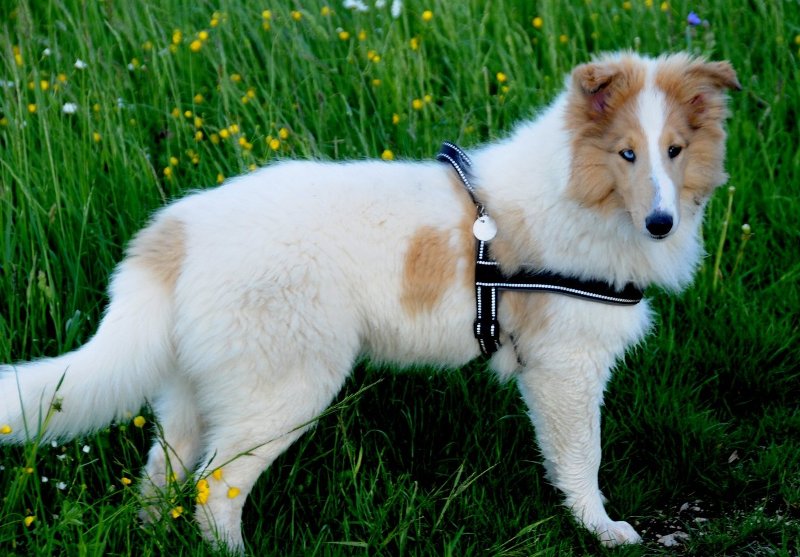 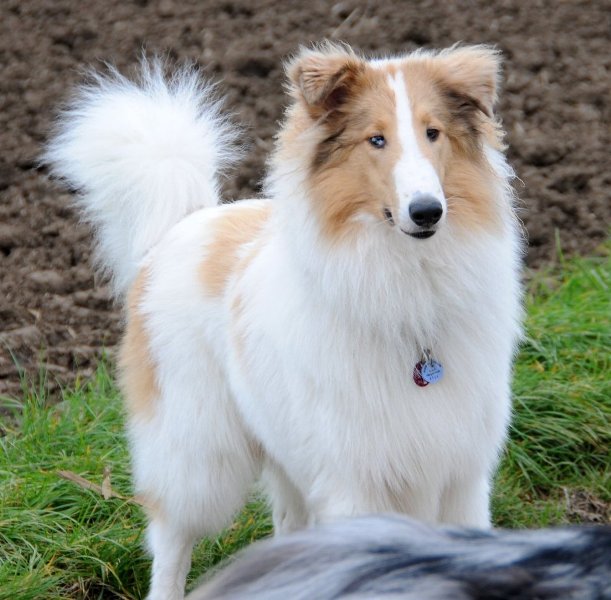 The White Collies (American White Collies) must by no means be mistaken for the so-called white tigers that emerge from a mating of two Merles. In Germany animal welfare regulations prohibit such a mating, because these dogs often suffer from serious health damages. White Collies have very big white markings. These white patches are so big, that the whole body appears to be mainly of white color. The colored spots on the body are found at the base of the tail and partly on the sides, sometimes up to the back.

A Collie needs up to three years until its coat reaches the full length and color of an adult Collie. Often even further development can be seen in the following years. An intensive colored Dark-Sable often becomes really dark after five years. Males – compared to females – usually develop a more abundant coat which sometimes makes them appear much taller, although the difference is only 5 – 10 cm. Due to hormones, bitches have a more intensive hair shedding, especially after having had puppies. But just as quick as they lose their hair they regrow it. Especially in the first years, it is very exciting to observe how the coat develops.

free Joomla templates
Back to top
We use cookies

We use cookies on our website. Some of them are essential for the operation of the site, while others help us to improve this site and the user experience (tracking cookies). You can decide for yourself whether you want to allow cookies or not. Please note that if you reject them, you may not be able to use all the functionalities of the site.